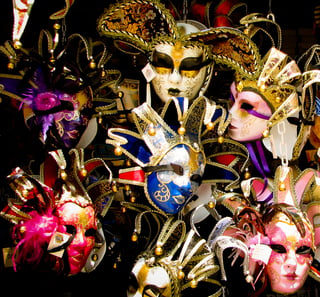 Now of course, just stepping into any airport is like stepping into Dante's 9 circles of hell. It all starts with a TSA pat down and ends with a migraine after a 10 hour flight seated next to a screaming toddler.

I'm talking about a travel situation that scared you to the core. Like the kind you get in a movie theather watching a scary movie that makes you jump out of your seat - minus the buttery popcorn, of course.

In keeping with the "spirits" of the season, I thought I'd share a couple of my frightening travel adventures with you - just for fun!

VENICE -  It's one of the world's most amazing cities! There are no roads, only waterways and narrow cobblestone streets paved in centuries of history.  After dark, it can become incredibly romantic or down right creepy, depending on your company.

This past summer I was visiting with a girlfriend. We took in the sights of St. Mark's Square and enjoyed a tasty dinner along the Grand Canal. It was getting late and my friend insisted she knew the route home. Instead she got us on a water taxi that took us an hour in the wrong direction.  We finally found our way back to our starting point. I got us on the water taxi that I had suggested 2 hours earlier. Suddenly our boat stopped at the next dock and a bell rang.  It was midnight. Water taxi service had ended for the night!

At this point, we were more than an hour's walk away from our hotel.  The dark, narrow streets were all but deserted. It really felt like we were walking thru a haunted halloween house!  As we made a turn down a dark, barely lit alley, I felt someone face me head on and grab my shoulders. I screamed! My friend screamed!

"Signora...Whatta you do out here?"...it was a local policeman. As soon as I caught my breath, I replied. "Oh, forgive me, we are lost".  He waved his hand in the air at us and said, "It's late".  I asked if he could help us with directions.  he said "No" and walked away from us.

We did make it safely back to our hotel after our 1,5 hour creepy midnight stroll and yes, I drank several glasses of wine!

Travel Notes:  Never let this friend be in charge of a map - ever again!

Mexico - I was on a solo trip to the Riviera Maya to review hotels. I was getting ready to meet a dear friend for dinner.  I heard with strange scratching noise at the door. I looked out the peep hole - Nada! This happened several more times and every time I looked there was nothing.  Finally I grabbed my shawl, opened the door and there stood this weird creature!

It screamed, I screamed and I shut the door!

About 5 minutes later, I timidly opened the door and looked around but saw nothing. I made my break and ran to the front lobby.  The woman behind the desk sensed by distress.  I began to tell the tale of this 3 foot tall creature with a monkey tail, claws and an anteater nose. It was obvious this poor woman had no idea what I was rambling on about. I collected myself and went over by the bellman to wait for my friend.

The bellman kindly put his hand on my shoulder and said, "Senora, esta bien. What you see - esta Tejon - Esta amigo." He motioned for me to follow him over to a fountain area in the middle of the driveway.  There was my creature and his entire coati family.  Papa coati was brining his little ones scraps from room service trays left in the hall way.

Travel Notes:   When you're with a group of travel agents and they get scared by their first encounter with a Tejon, try not to giggle.

SCOTLAND - Allow me to preface this story by saying I often watch "ghost hunter" reality shows on TV.  I don't believe in ghosts so I sit on my sofa thinking what a farce it is when people get all freaked out when they think they see a ghost.

I was visiting Scotland for a travel conference and a local friend offered to take me to visit the town of Stirling. If you've seen the movie "Braveheart", you know a bit about Stirling.  From a distance the town looks like a 2 humped camel.  Atop one hill is Stirling castle, a mighty fortress.  Atop the other hill is a monument dedicated to William Wallace and is home to his sword.  In the valley between is where the Scots fought for their independence.

On this particular evening, there was a HUGE celebration at the castle. It was the 500th year anniversary of the battle of Bannockburn.  Bagpipes, war re-enactments, kilts, costumes and fireworks.  After the festivities, my friend suggested we take a stroll up to the monument as it has a wondeful view of the city.

The path up to the monument is this long and winding one covered with over hanging trees. As we started to ascend, a thick fog rolled in.  It was dead quiet.  Suddenly, a man and a woman dressed in 14th century outfits appear moving slowly toward us.  I stopped in my tracks, right in the middle of the path. I froze!

Without saying a word, the couple walked around me as I stared.  As he passed by, the man nodded at me and then poof! They disappeared into the night.

Travel Notes:  If I ever did meet a ghost I would act exactly like those people on TV. I would be useless!

No matter where we roam, travel always takes us out of our comfort zone.  It challenges us, and that can always be a little bit scary.  That said, it's often the scary moments that leave us with the BEST stories!