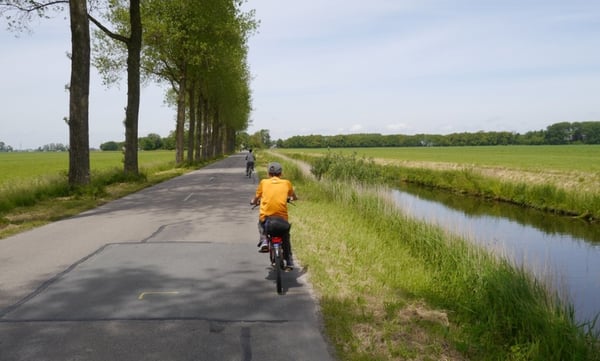 While we are an American family, my children’s ancestry represents opposite sides of the globe.  My family is from The Netherlands; my husband’s family is from India.  Guess whose gene pool won out?  Yes, my two sons have brown eyes and brown hair without a trace of my fair complexion.  My in-laws also live close to us, allowing my sons to experience Indian food and culture on a regular basis.

That’s why I was eager to take them to The Netherlands for a taste of what it means to be Dutch.  To do this, I decided that we’d need to get outside of Amsterdam, though it is my favorite European city.  After a few days of visiting the Anne Frank House, admiring the work of Van Gogh, and cruising the picturesque canals, we boarded a train and headed north to Groningen, home of our Dutch ancestors.

We had a plan.  During the prior months, we researched our family’s genealogy, a project that I highly recommend doing with your own children.  My mother had meticulously collected the names, birthplaces, and birthdates of generations of our family.  It was no easy task, especially when you consider that my grandmother alone had 12 brothers and sisters!  We then inputed that data into the website Ancestry.  We were able to trace back five generations to our last relatives to die in The Netherlands.  The website listed the towns where their death records had been filed.  Using Google Earth satellite maps, we then located the cemeteries in each of those very small villages.  Our goal was to find their grave makers.

From our home base in Groningen, we rented bikes and boarded another train to Delfzijl.  With downloaded bike maps tucked away in our backpacks, we planned to ride to Bierum and t’Zandt, where we believed four of my great-great-great grandparents were buried.  We were on a grave hunt.

As we rode, the boys and I truly felt Dutch.  The Netherlands has an amazing infrastructure for cycling.  There are well-signed bike highways around the country.  The first ten kilometers of our ride were truly glorious.  We biked on a dike along the Wadden Sea through flocks of sheep.  Then the path took us through green fields and up and over irrigation canals.  The Dutch have bridges with built-in channels for your bike tires.  And of course, it’s flat, so the biking is easy.

We rode from one cemetery to the next, stopping to get off our bikes and walk down rows of tombstones, each of us searching for a different name.  Bont.  Schuitema.  Brondijk.  We searched and searched.

Along the way, we learned the perils of traveling off the beaten path.  We hadn't packed enough snacks or water (what was I thinking?!).  After 20 kilometers and six villages, we hadn't found a single open restaurant, cafe or grocery store.  Toward the end, we did find a hardware store that sold Mars ice cream bars and droop, a Dutch candy.  Years later, the kids still talk about the droop… and the fact that we got caught boarding a train without tickets, because the ticket machine in Uithuizermeeden (try pronouncing that name!) wouldn’t take our credit card.  It was an adventure to say the least!

And that’s my point.  Travel isn’t always about seeing the sights, laying on a beach or cruising to a tropical paradise.  Sometimes it’s about being a local - and even better, if it’s being a local in a place where your ancestors once walked the streets.  We never did find those tombstones, but my children certainly have a better understanding of the place from which their family comes.

Shellie Bailey-Shah is the driving force behind KidTripster, an online family travel magazine that provides information & inspiration to families traveling with children anywhere in the world. She's an expert in family travel, having visited to 34 countries on 6 continents, as well as 46 states & 44 national parks - nearly all with her children; she even took her sons on a 72-day, backpacking adventure around the world.