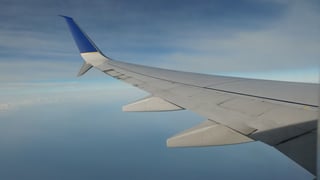 Melanie was one of my fellow tour members on my recent trip of a lifetime with Gadventures to the Galapagos. In real life, she's a doctor from San Francisco.  Melanie was technically a MIA for the first two days of our adventure.

Our tour group collected and met at our hotel in Quito, Ecuador. The next morning we flew to Balta Island in the Galapagos and then made our way via water taxi to Santa Cruz Island.  We hiked and swam at the breathtaking las grietas, interacted with endangered tortoises at the Charles Darwin center and feasted on delicious local cuisine at el calle de kiosko fresh out of the ocean. Still no Melanie.

Our group was just about to cast off on our 3 hour boat journey to the remote island of Floreana when we hear someone yelling on the dock "Wait, stop, I'm Melanie". She ran down the gangway, hoisted all her luggage onto a seat in the boat and proceeded to fall into a deep sleep draped over her bags.  She slept thru the huge pod of hundreds of wild dolphins who swam along with our boat for over an hour - one of the most amazing sites of our entire adventure!

That night at dinner Melanie happened to sit next to me. Introductions were finally properly made as she explained her tardiness to the group. According to her, American airlines were entirely to blame. Her original itinerary was to fly from San Fransico and connect in Chicago O'Hare for her flight to Quito Ecuador where she was suppose to join up with our group.

That is where the odyssey begins...

"I missed my connection in Chicago. The gate agent tried to help me so she put me on a flight to JFK thinking I could get a late night flight to Quito from there. I missed that connection too so I had to get a hotel at JFK. The next morning they had me booked early on flights from JFK to Philadelphia to Miami still hoping to make a connection to Quito late in the day from Miami but that didn't happen either. I had to spend another night at a hotel in Miami. Finally they got me from Miami to Quito to Quayaquil, Ecuador with just enough time to make the ferry and boat connections to meet up with you guys"

During dessert I explained to Melanie that I was a travel agent and asked to see her details. Perhaps she did have a legit gripe with American Airlines and maybe I could help. She whipped out her phone asking me what recourse she had against what American airlines put her through. I see that she booked her own flights on Travelocity herself. One glance and I saw the entire picture. I questioned her why she booked this specific itinerary....

"After I booked my tour I asked Gadventures to help me book my flights. I thought their price was expensive. I went online to see if I could get a better deal on my airline tickets.   I went to a ton of different airline and travel websites and most of the prices were comparable. Finally I found this great itinererary and saved almost $400!"

Still thinking she scored a great deal and the blame was entirely on the shoulders of American Airlines, I asked, "Have you ever heard the saying when you see a great deal that seems too good to be true it probably is?" I then went on to explain the problem.

Her original "great deal" that saved her $400 came with a 1/2 hour connection in Chicago O'Hare. Her chances of making that connection would be slim to none, hence the reason for the much cheaper pricetag.  It was priced accordingly knowing there would be a very high probability that she would miss her Chicago connection.

Then I pointed out the travel math to her:

So her "airfare deal" actually cost her our of pocket, not to mention all the stress and aggravation.  I suggested that she save all of her receipts, make a claim with her travel insurance company for her trip interruption. Perhaps they could re-imburse her for the loss of her tour days and out of pocket costs.To which she replied -

"What? I didn't take trip insurance, that cost even more money!"

So the important take away here one should consider the next time you're about to pull the trigger on a really great online deal is how much that deal might ultimately cost you.  Better yet, work with a travel professional that knows the scams.  We're not here to try to part you from your money. Quite the contrary! We're here to bring you the most value for your dollar and safe guard priceless experiences no matter where you roam.