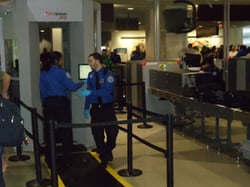 UPDATE Jan 12, 2016 -  The Department of Homeland Security has decided to delay the implementation of the REAL ID act until 2018. As the rule now stands, by Jan 22, 2018: The REAL ID Act will start to be enforced at airports and cruise terminals.  By Oct. 1, 2020 Every traveler will need a REAL ID-compliant license, or another acceptable form of identification, for domestic air travel.

For A fuller explanation.....

Airport security checks will be getting a bit more complicated.  It's all about using your photo driver's license as ID to board domestic U.S. flights.  U.S. citizens have always needed a passport to fly overseas but were able to use just their photo driver's license to fly within the U.S.  This rule may be changing for some of us.

The rest of you...please listen up and be aware because this is important!

All airline passengers are required to arrive at the airport with the proper ID.  If you do NOT have the proper ID you can be denied boarding.  This means you won't be allowed to pass security or get on your plane. You will lose the entire cost of your trip.  Because having the proper ID is the responsibility of each and every passenger, none of your losses will be covered by any travel insurance. Ultimately you will be out of pocket for the entire cost of your trip!

So why is all this happening?

Back in 2005 Congress passed the Real ID Act based on recommendations from the 9/11 commission.  The idea was to enforce stricter standards to prevent photo driver's licenses from being forged or be obtained illegally with counterfeit records. These changes were created with the best intentions to help keep the public safe from terrorists and criminals.  All States were to be compliant by the end of 2015.  Obviously the 22 states above complied.  The remaining states have procrastinated and this is the reason for current concern.

18 states have asked and been granted an extension until Oct. 2018 so that they can get with the program:

Four more states were previously granted extensions have had their extensions extended.

This leaves 5 states as non-compliant.  Right now their photo drivers licenses are not up to standard and they have not filed for any extensions. This new Jan 2018 extension does cover them but some of these states have legal issues pending with the Federal government as well:

As you can see, this entire situation will be evolving.  So what is our advice to travelers who will be flying on U.S. domestic flights this year...

1. Keep alert to the news - The government will issue a 120 day  (4 month) warning about not accepting any non-compliant photo driver's licenses.

2. Cancel for Any Reason Travel Insurance -  Having this type of travel insurance means you can simply cancel your plans.  If for some reason your photo ID becomes non-compliant and you don't have enough time to obtain a passport then you can cancel your travel plans and still be reimbursed for your costs.

3. Get a passport - If you want to be 100% of your travel plans then applying for a passport NOW is your best option.  If you have an important meeting or event like a destination wedding that you MUST attend, this would be the safest course of action. This way you'll have no worries whether or not your photo driver's license will be OK.  Besides, it also opens you up to a world of travel possibilities in the future!

OH....and speaking of passport, there are some new important changes there too...

The the FAST Act highway-transportation bill signed by President Obama on Dec. 4, 2015 gives the State Department the authority to deny, revoke or limit  the passports of any Americans owing more than $50,000 in back taxes to the IRS.  This is an attempt by the U.S. government to collect $131 billion​ in assessed taxes, interest and penalties.

Another way to get your passport denied or revoked is if you owe more than $2,500 in child support. Child support accounts must be brought current  and payer must have four government agencies remove the block from their computer systems before their travel rights and passports can be reinstated.

Once again, it is important that all travelers have a full understand of their rights and obligations.  If you have any questions or concerns, be sure to ask first and avoid disappointment later.