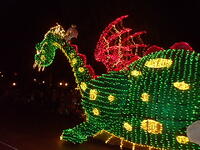 There is a lot to see and do while you are in Walt Disney World!  Throughout the four theme parks you will enjoy rides, shows, character meet and greets, and parades!  For many guests the parades at Disney are a highlight of their vacation!  Whether you arrive early for the perfect spot or watch from a distance you are sure to be left with a lifetime of memories.

The newest parade at Walt Disney World can be found at Magic Kingdom.  Disney Festival of Fantasy Parade features Princesses, Tangled, Peter Pan, Brave, Maleficent, and of course Mickey and Minnie to name a few.  There are over 100 performers, the floats are stunning, and each float is accompanied by its own music.  You can usually see this parade at 3:00 in the afternoon and it lasts for about 12 minutes.  However, you should always check the Times Guide before you go and note that the parade is subject to cancellation in the event of unfavorable weather.

The key viewing spots for the Festival of Fantasy Parade are located at Central Plaza, Frontierland, and Main Street, USA.  If you plan to sit in a key viewing area then you need to plan ahead, seating is limited and because the parades are a key part of many Disney vacations, these areas fill up quickly.  I personally do not mind where I sit and it can be a challenge to have my kids stay in one spot for a long period of time just waiting.  That being said, I also know that it can be done, with a little work.  In 2011 we had great seats for the parade at Hollywood Studios, (Pixar Pals Countdown to Fun Parade is no longer running.), we arrived early, parked our stroller, took turns taking the girls to the bathroom, took turns getting food, ate our lunch in our parade seats, and then watched the parade in its entirety.  It was fantastic!  The characters came right up to the girls and they enjoyed every magical moment.

My family loved Mickey's Jammin' Jungle Parade, which ran at Animal Kingdom until May of 2014, the parade is no longer running due to refurbishments that interfered with the parade route.  This parade had been running since October 2001 and it was fun to see the floats with families who were on vacation included in the parade, being part of a parade at Disney is surely an unforgettable memory for those families.  At this time there are no new parades planned for Animal Kingdom.  If you have a question regarding the parades at Walt Disney World, please ask, over the years the parades have changed and there are times when there are no parades at the parks.

If you prefer an evening parade then you will love the Main Street Electrical Parade at Magic Kingdom.  This particular parade, which features floats and performers covered in lights and accompanied by music has been open since June 5, 2010.  You can usually see this 20 minute parade at 9:00 pm and 11:00 pm, depending on park hours, and weather permitting.  Again, please be sure to check the Times Guide before you go.  I like to view this parade near the entrance of Magic Kingdom and leave just before it is over so we are not to overwhelmed by the crowds of people who leave the park at the end of the night.

Which parades have you seen?  Do you have a favorite parade?  Share your special parade memories with us!

Mother of two, lover of all things Disney and family travel agent at Vacationkids.com. In her free time Becca can be found either running her kids to activities or running a marathon