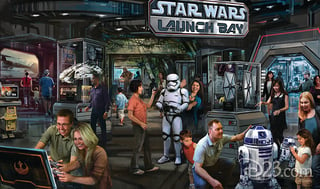 The one sure thing aboutWalt Disney World is constantly changing.  2016  for Disney World is no exception.  Here are some of the latest openings, updates and fun visitors can expect for 2106 Disney vacation...

Star Wars -   Season of the Force events were announced in early 2015. These two events were to be held in both California and Orlando. In Nov 2015  Disneyland hosted their version just in time for the theater release  of The Force Awakens.  No further updates have been posted for  Orlando and Star Wars days in Florida for 2016 have been canceled.  Star Wars Days in Orlando is an anticipated annual event that has been held for years in May ("May the 4th be with you" -  the official holiday for all Star Wars fans). Now it's suddenly vanished!

We Padawans know not why -  the Disney Jedi Masters have not told us so.

For now..."Move Along. There is nothing to see here".

To date we know Disney Hollywood Studios in Orlando  announced a new Star Wars themed fireworks show for that park  coming sometime in 2016.

We also know Disney IS creating an 11 acre Star Wars themed expansion of Disney Hollywood studios. Rumors say construction has started with full completion due sometime in 2018. We expect to see on going roll outs of Star Wars themed attractions over the next several months (like we did with the recent make over in the Magic Kingdom with Fantasyland).

Disney promises Star Wars Launch Bay will be an immersive experience into the Star Wars saga including The Force Awakens, along with special exhibits and peeks behind-the-scenes, special merchandise and opportunities to encounter Chewbacca and Darth Vader.

The ever popular attraction "Star Tours – The Adventures Continues" will offer a brand new experience from Star Wars: The Force Awakens.  All Star Tours riders will experience this new adventure. After that, it will be up to the will of the Force which experience rides will get to see.

Last, but certainly not least, is Jedi Training: Trials of the Temple. This show is a re-imagined Jedi Training experience will take younglings to the secret site of an ancient Jedi temple where they will face Darth Vader along with the Seventh Sister – a new villain from the Disney XD series “Star Wars Rebels.”

Toy Story Mania - This popular movie themed video shooting gallery has received an additional track to help alleviate lines.  We also know Disney is working on an 11-acre themed Toy Story land which will include a kid-friendly roller coaster and an alien saucers attraction but the Disney Jedis are keeping this secret too

Club Disney, a new character dance party located re-purposed studio space in Disney Hollywood Studios near the Tower of Terror and the Rock n Roller coaster. Guests can recharge their electronic devices while recharging themselves in a cool snacking station while Disney DJs spins the top  40 Disney Radio tunes in time with classic Disney animation scenes projected on the walls of the club.

Frozen - The Norway exhibit in Epcot World Showcase is undergoing a huge transformation.  The Maelstrom will be re-imagined into "Frozen Ever After".Guests will be transported to the Winter in Summer Celebration where Queen Elsa embraces her magical powers and creates a winter-in-summer day for the entire kingdom. They will also visit Elsa’s Ice Palace and the ice-blue world of the North Mountain along with other locations before returning to the Bay of Arendelle. Of course, favorite “Frozen” characters, including the Snowgies from the animated short “Frozen Fever,” will be part of this new attraction, along with character meet opportunities with Anna, Elsa and Olaf. Rumors are swirling like snowflakes that this will open in time for the heat and crowds of summer 2016.

Disney & Pixar Short Film Festival - Also in Epcot guests at the imagination pavilion will be treated to a new 4D cinema attraction featuring innovative Disney and Pixar animated films with some "behind the scenes" glimpses about their creators.  Honestly, this attraction seems better suited for Disney's Hollywood Studios but I guess it's a good way to re-purpose Captain EO - Good bye Michael Jackson RIP.

Soarin’-  will sadly be grounded from January until the summer of 2016. This beloved attraction will undergo a full refurbishment which will include a new projection, a new aerial firm and an additional new theater which will certainly help alleviate wait times.

The Magic Kingdom is breathing a little sign of relief after all the Fantasyland construction of the recent past.  That said, there are a few notable additions coming your way -

Olaf's Frozen Escape - Olaf will be coming to Tomorrowland and taking over for Stitch's Great Escape. Olaf will meet theater guests Then, because he doesn’t have his personal snow cloud with him, he will begin to melt causing all sorts of intergalactic mayhem including the ability to interact with guests.  Disney promises a 4D experience including cutting edge technology, frozen sprays of water and the smell of carrots. So far ETA for this attraction is sometime in 2016 so stay tuned.

Jungle Skipper Canteen is the new themed table service "canteen" in Adventure land. This Magic Kingdom themed dining experience will take it's lead from the storyline of the nearby "Jungle Cruise". It's menu will be inspired by the exotic flavors of flavors of Africa, Asia and South America while it's staff will serve up a health dose of wild life fun.

Disney Springs is the new multi-year and multi-million dollar transformation of Downtown Disney.  This area has long been billed as an "admission free" shopping, dining and entertainment mecca.  This area has doubled in size with 150 new establishments including APEX by Sunglass Hut, Art of Shaving, Chapel Hats, Erin McKenna's Bakery NYC, Havaianas, Sanuk and Sound Lion. To handle all the new visitors two multi-level parking garages offer parking capacity for 6,000 cars.

The Landing is the first of 4 new "neighborhood" emerged from the area formerly known as Pleasure Island. The signature themed restaurant here The BOATHOUSE is now open, offering live music and delicious selections of steaks, chops, seafood and a raw bar. Experiences here include guided tours aboard the Captain's 40-foot Italian Water Taxi (with champagne and chocolate-covered strawberries), and guided Amphicar rides that launch from land but enter the water for a 20-minute tour of Disney Springs.

There are many other notable additions to The Landings including Tea Traders Cafe by Joffrey for special blends and tea themed treats. Foodies will know Morimoto Asia from Chef Masaharu Morimoto of "Iron Chef America" Jock Lindsay’s Hangar Bar is an aviation themed lounge that gives a nod to Indiana Jones and STK Orlando.  In addition, many new themed and immersive nightlife and entertainment establishments are slated to open in 2016.

Vacationkids Travel Agents know our Disney side and we love helping our families get the most fun and value out of their Disney Vacation dollars.  Talk to us when it comes to creating your 2016 Disney Vacations.