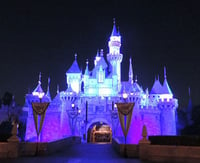 Disney World and Disney Parks have so much to offer that discussion groups, boards and chats about Disney vacations have formed their own little language.  If you've been doing your homework online to get a jump start with your Disney Vacation plans, you may find this Disney-speak a bit confusion.

Want to learn how to speak Disney? We've put together a guide to Disney Lindo to try and help...

EPCOT -Wonder why there is no common abbreviation? That's because EPCOT is the abbreviation--well technically, and acronym for Experiential Prototype Community of Tomorrow.  That's a mouthful!  EPCOT is made up of Future World (FW) and the World Showcase (WS).

FW- explores a lot of the world of tomorrow --Spaceship Earth, Innoventions, Test Track, The Land, and The Seas are some of the sections to explore in FW -- this part of EPCOT typically opens first, but some parts (like Innoventions) close earlier than other parts of the park.

WS- allows guest to explore different countries and cultures around the world.  WS opens at 11 a.m. and surrounds World Showcase Lagoon, which is where the Illuminations fireworks and light show every night.

KTTW – Key to the World.  This is the single card that has been used by park goers for years which gives them access to their hotel room, Disney park admission, dining plan credits, and charging back to the rooms.  The KTTW has recently been replaced by the Magic Band but cards are still used for certain occasions based on a guest’s reservations.

Magic Band – a color waterproof wrist band (looks kind of like a watch) which uses RFID technology and a touch point sensor to recognize you. Magic Bands can be used to unlock your hotel room, hold your park admissions, check in at FastPass+ entrances, connect Disney PhotoPass to your account, use Dining Plan credits, charge food and merchandise purchases back to your room.

EMH – Extra Magic Hours; Resort guests get extra time in the parks – an hour in the morning or three hours after the park close. Look on the park schedules for which parks are offering EMH during your stay.

F&G – Epcot Flower and Garden Festival, held in the spring each year, generally from mid-late March to early/mid May.

F&W – Epcot Food and Wine, held in the fall, generally from September until early November.

MNSSHP – Mickey’s Not So Scary Halloween Party, a ticketed event held in the Magic Kingdom on select nights in September and October.

TS Credit - Table service credit. If you purchase the Disney Dining Plan or Deluxe Dining Plan, your plan includes one or more sit-down meals (TS). This is a meal at a restaurant where you are seated and waited on, or where there is an all you care to eat buffet.

Signature – A signature meal (or Signature Restaurant) is a more exclusive or more expensive Disney restaurant. If you are using TS credits, a Signature meal will “cost” or use two regular TS credits.

Quick Service or Counter service meal – a restaurant where you approach a counter, place your order, wait for it to be given to you, and then find a seat.

ADR – here’s a good one! Advanced Dining Reservation. Dining reservations can be made 180 days prior to the start of a guest’s reservations, and all reservations now require a credit card to hold them.

Some of the attractions, shows and restaurants have pretty long names. Here are a few of the most popular abbreviations

FTLK- Festival of the Lion King

And there are plenty more!!!!

There is SO MUCH to see and do at Walt Disney World that guests need to know all possible short cuts.  This includes knowing the lingo, planning your itinerary each day and yes even walking short cuts!  Disney doesn't allow other travel companies to discount their prices.  When you book with Vacationkids, you'll pay the exact same price as if you booked your trip yourself directly through Disney.  The difference here is that Vacationkids will save you an infinite amount of valuable time.  We speak fluent Disney-ese so you don't have to.

Mary Ellen is our Vacationkids expert on all things Disney. She is also a Certified Family Travel Specialist from the Family Travel Association and dedicated Girl Scout Leader.