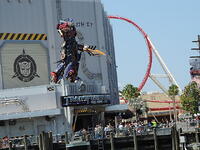 An Epic battle to save human kind is now being waged at Universal Studios Transformers 3-D Ride Orlando!

Vacationkids was fortunate to receive a sneak peek as this fantastic new atraction underwent technical previews prior to its official grand opening extravaganza on June 20, 2013. This $100 million dollar attraction in Universal Orlando is actually the third of its kind following the celebrated openings of this same attraction in Universal Studios Hollywood and Universal Studios Singapore. Transformers has become the "must see" attraction in these parks and no doubt will soon have a similar reputation here in Orlando.

Transformers The Ride 3-D attaction sits right along the lake in the center of Universal Studios Orlando. Fans of Universal Orlando might remember this  backlot area to be the old home of Hercules & Xena and Murder She Wrote. Now towering over the entrance to this attraction is a 30 foot

The Transformers are alien robots that can hide in plain sight as cars and other vehicles. You will find yourself at the base for Nonbiological Extraterrestrial  Species Treaty or NEST being protected by the Transformers. The good autobots like Bumblebee, Rachet, Ironhide and Optimus Prime along with General Morshower communicate with us via numerous video screens giving us the latest communication and instructions.  It seems Megatron and the evil Decepticons are on a quest to take control of the All Spark, the life force of power for all Transformers. Humans are caught right in the middle of of this war. The autobots are have enlisted the help of their colleague Evac, an evacuation vehicle to transport humans out of this war zone. You are given 3-D glasses as you hope to escape with your life. 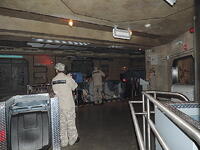 If you are a fan of other emersive and interactive Universal Attractions like The Amazing Spiderman or Harry Potter and the Forbidden Journey, Transformers The Ride 3-D is a similar attraction experience. The difference here is that Transformers really "pops".  Without giving too much of the fun away, here you don't see what's coming until it's right up in your face. Lighting, hot air explosions and mist give a 4-D touch to all the mayheim caused by Grinder, Devastator and Megatron.

My favorite part was actually some of the backgrounds to the battle scenes. Like the movie, some of the war scenes are played out in these monolithic industrial settings. Several of these scenes were filmed at the old Bethlehem steel mill buildings near where I live in Bethlehem, PA. Recongnizing some of this scenery made the battle a little closer to home for me.

Transformer fans will enjoy all the interactive features and triva found along the que lines. There are control panels and trivia screens where you can identify sillouettes of your favorite characters. Even if you're not a fan, the que area does a fantastic job of catching you up on the backstory so that you're fully up to speed by the time you enter your evac vehicle.

This is considered a family friendly attraction but it may be a bit intense for younger children. There is a height requirement of 40 inches.  There is also an air conditioned child swap area full of seats right before guests enter their evac vehicles. As with most attractions, the exit ends in the gift area that included some great fashions with industrial influences.

One of the new features coming to the park along with Transformers 3-D ride that I was looking forward to experiencing was the  Optimus Prime, Bumblebee and Megatron Meet & Greets. These towering characters are now fully interactive and can have conversations with visitors in robotic character voices. These characters were not presnet when I experienced the technical rehearsal. Oh well, I guess I'll just have to go back and see it again!