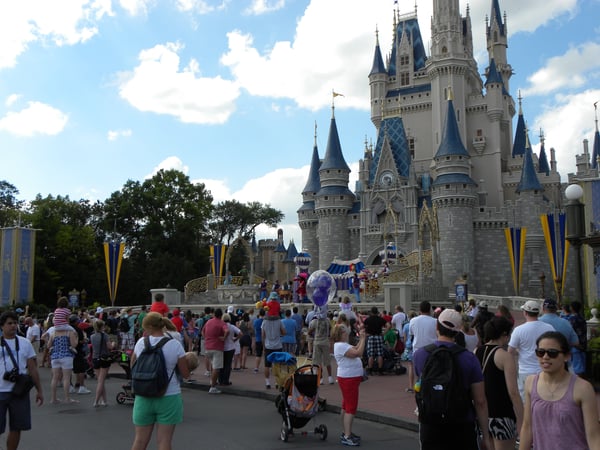 One of the best parts of a Disney World vacation is discovering all the weird and unusual trivia found there...

1. No gum is sold in Disney parks. If you're a chewer, better bring your own along.

2. It's NOT a Small World After All - Disney World encompasses over 50 square miles.

3. Hidden Mickey's can be found everywhere. A hidden Mickey is the 3 circle silhouette of the head and ears of Mickey Mouse disguised and subtly hidden in decor, rock formations, table settings and designs of all sorts. Thousands of hidden Mickey's have been recorded and more included with each park update.

4. Disney World has only closed three times since it first opened in 1971. Hurricane Floyd closed the park in 1999. The terrorist attacks of 9/11 in 2001 closed the park as well as a 2002 power failure. When the park closed on 9/11, it took less than 30 minutes to evacuate and close the parks.

5. Guests in Walt Disney World are never more than 30 steps away from a trash can.

6. Visit The hat shop on Main Street in the Magic Kingdom and you'll see an old pay phone on the wall. Pick up the receiver and you and eavesdrop on an interesting conversation.

7. There are no bathrooms located in the Magic Kingdom's Liberty Square, in keeping with the time period of that area.

8. In the Magic Kingdom Train Station, look closely for articles left by other "guests,” including Mary Poppins and other characters from Disney films.

9 An imagineer named George was killed during the building of Pirates of the Caribbean.  It is said his ghost haunts the ride to this day.  Workers say "goodnight George" before they shut down the ride each night as a superstition to prevent attraction break downs the next day.

12. The 48 square miles of Florida swampland now home to Walt Disney World was originally purchased by Walt for $5 million dollars.

14. Mickey is more of a fashionista than Minnie. He has over 290 different outfits in his closet compared to her 200.

15. The new Avatar section of Animal Kingdom is expected to open in 2015 at a cost of more than $400 million dollars.

17. Disney Hollywood Studios was originally built as a working studio, not a theme park. The Mickey Mouse Club was filmed there with Britney Spears, Justin Timberlake, Ryan Gosling and Christina Aquilera.

18. Adult admission to Disney World when it opened was $3.50

19. Disney Transportation System is the third largest bus system in Florida with over 290 buses.

20. Disney has grown over 500 oak trees from acorns of the Liberty Oak found in Liberty Square.

21. Over 200 pairs of sunglasses are turned into lost & found each day at Disney World

22. The Disney Company bought 12,000 acres of Florida Wetlands located about 15 miles south of the park back in the 90's. the idea was to maintain the balance of nature and offset the environmental impact of the parks.

23. More than 1.6 million turkey legs are consumed at the parks every year. They are such a fan favorite that you can buy turkey leg hats, t-shirts and other souvenirs.

24. Mr. Toad's Wild Ride was an original park favorite. After it closed a tombstone was placed in the pet cemetary of the Haunted Mansion for J.Thaddeus Toad.

25. The Lake used for Fantasmic is only about 1 foot deep

26. U2 was first approached to be the starring Rock Band for Hollywood Studios Rockin Roller Coaster. When they decline, the ride was based on the band Aerosmith.

27. In addition, Rocking Roller Coaster was the first inverter coaster in Disney and the first coaster ever to have a synchronized soundtrack.

28. Animal Kingdom's Expedition Everest and Hollywood Studios Tower of Terror stand 199 feet tall. This is because any structure 200 feet tall would require red flashing lights according to Aviation rules.

30. The hydrolic thruster and cylinder used to bring the Yeti to life atop Expedition Everest uses more power than a 747 jet engine.

31. At 5.7 million gallons, Epcot's Aquarium of the Seas is the second largest aquarium in the U.S.

32. The fastest ride at Disney World is Test Track which reaches speeds of 65 mph.

34. Technology used to make ghosts dance in the Haunted Mansion was also used to make "Finding Nemo" characters swim under water with the real fish found at Epcot's The Seas.

35. Walt Disney died of lung cancer in 1966. His last words were "Kurt Russell" who at the time had just been signed to a 10 year contract for Disney Movies.

36. Disney's first Audio Animatronics were first introduced to the world at the 1966 World's Fair in Flushing NY. "It's A Small World" and "Great Moments with Abraham Lincoln" which later evolved into today's Hall of Presidents.

37. Mickey Mouse was the first cartoon character to receive a plaque on Hollywoods legendary walk of fame.

38. You never have to pay for water in Disney World. Just go to any quick service restaurant in the park and ask for a cup.

39. One of the most popular Disney souvenirs of all time was the Mickey Mouse watch. It was first introduced in 1933 and sold for $2.95. Walt Disney himself was presented with the 25th million watch in 1957

40. Need to cool off at Hollywood Studios? Look for the "Singing in the Rain" umbrella in the Streets of America. Stand on the pad and instant rain.

41. Talk about a photo op -it is estimated that 4% of all amateur photographs in the U.S. were taken inside a Disney Park.

42. More than 50 million cokes are consumed each year at Disney Parks. You won't find a Pepsi.

43. Walt Disney World employs close to 60,000 cast members making it one of the largest employer in the U.S.

44. Disney's Wedding Pavilion near the Grand Floridian Resort is designed to give the Bride and Groom a great view of Cinderella Castle while saying their vows.

45. Every year over 3 million flowering plants are planted at Walt Disney World while the horticulture staff maintains over 2 million shrubs, 13,000 roses and over 200 topiaries.

47. Walt Disney World Costume Department is home to over 1.2 million pieces of clothing making it the largest wardrobe department in the world. Each Cast Member has 3 costumes.

48. It takes over 150 tractor trailor loads of decorations to Deck the Halls for holiday celebrations. Wonder what Disney's electric bill is for all of this?...it's zero, they have their own power plant.

49 Disney World Resorts Offer Guests over 27,000 hotel rooms and are constantly adding to that number.

50. Since 1971, the Walt Disney World monorail trains have logged enough miles to make 30 round trips to the moon.