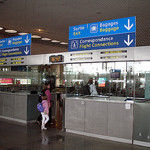 For the safety and security of children everywhere, single parents traveling overseas with minor children have additional responsibilities when it comes to travel documentation.  This rule applies to divorced parents, widowed parents, co-parents, grandparents and even married parents who will be traveling separately. Similar questions of legality can arise if passport names don't all match. This can happen in the situation where
a mother uses a different name from her husband and children. Another red flag might be if you are bringing another child along on vacation, say a child's friend or a relative that does not have the same last name. Once again legal documentation would need to be presented at border control.
Besides safety and security, not having the proper documentation can be VERY costly. If you arrive at the airport to board your flight and you do not have the correct paperwork, passport etc., you and everyone traveling with you will be "denied boarding". This means the airlines will not allow you to fly. You will loose the cost of your vacation. In addition, denied boarding is not something that is covered by travel insurance.
When I was a single mom, I knew to double check State Dept. information on international travel or US Dept. of State information on child safety. Every country has their own specific border entry and exit rules as well as accepted forms of documentation when it comes to single parents traveling with minor children. Generally speaking, to prove your right to travel, border officials want to see original proof of full custody paperwork, death certificate of the co-parent or a notorized letter of permission from the child's co-parent. Single parents would need to present one of these appropriate documents along with everyone's passports. Some countries require translated documents so it's always good to check the rules as part of your vacation planning.
For a while, Mexico relaxed their rules regarding single parents when the new US passport rules came into effect. Earlier this year Mexico issued an upate. Customs and Border Protection (CPB) posted a recommendation on their website stating that minors aged 17 and under traveling to Mexico with only one parent, or with someone who is not a parent or legal guardian, carry a notarized letter of consent from the non-traveling
parent(s). Written consent should be in the form of:...
1) a notarized letter of consent signed by the non-traveling parent (preferably in English and dated within one year of travel)The parental consent letter should include: Who, What, Where, When, Why, and contact information for the absent parent(s).
2) a death certificate for the non-traveling parent or
3) proof that the parent traveling has sole custody of the minor(s).
If you have tickets for a flight to Mexico,
Any airline can ask for this documentation at check in. If you do not have it ready to present, they can deny boarding. Recently we've heard that AirTran Airways and JetBlue Airlines have denied boarding and/or have policy on their website as a result of the CBP recommendation.
Admittedly, there have been times in the past when I have arrived at the airport alone with my three children and I was allowed to pass without presenting my notorized letters of permission from their father.  There have been other times when the kids and I have been detained while officials   scrutinized every detail of my co parent permission letters.  Always be prepared with the correct documentation to avoid additional stress, hassles and out of pocket costs.  If you are planning an upcoming trip, speak to one of our family vacation experts who can walk you thru the process.